The MFR Blog will share information that relates to retro computer news, history, repair and hobby electronics that I think is interesting or useful to others. Feel free to leave a comment.

You had me at READY

█  My computer journey started when I was about 12 years old

My computer journey started when I was about 12 years old. I had a subscription to Popular Science magazine at the time. In one month's issue there was a full-page advertisement for a microcomputer you could build from a kit for $99 – it was a Sinclair ZX81. I remember thinking that was so cool; I must have this! I also had a budding interest in electronics so the thought of building my own computer from a kit was exciting. My parents said, no – mostly because they were not keen on ordering a box full of electronics parts from a magazine ad for their twelve-year-old son. I was disappointed, but I get it now.

It was not too far after that I heard about the wonder computer of the 1980s. Not being a mail order kit computer, my chances were better getting this computer, especially, since it was endorsed by Captain Kirk, himself. I had to wait until my birthday in October, but my parents had agreed to buy me a Commodore VIC-20. It came with a chubby C2N Datasette, VIC-1311 joystick (which I still have in its original box) and my first game on cassette, Snakman. Sadly, the only spare TV in our home was an old 18-inch black and white RCA TV, so I had to use that for the first year until I got a similarly-sized colour TV for Christmas one year.

I got my VIC-20 early in its 1981 release – I was the proud owner of a North American rev 1 design. It was powered by a single 10VAC transformer power supply, the case badge was stamped metal (not plastic), and it sported the "PET style" keyboard – a wider flatter-top key with cap print using the Microgramma Extended font style. This was a great design for the time. It is too bad Commodore changed the keyboard design for subsequent revisions of the VIC-20 and ultimately, the Commodore 64.

Black and white TV aside, I was hooked on typing in program examples from the VIC-20 User's Manual, especially the games at the back of the manual. First was Killer Comet, then Rocket Command and then Tank-v-UFO. I then discovered COMPUTE! magazine and would spend hours eagerly typing in game programs that were printed out over several pages of the magazine. Having never typed on a keyboard before typos were aplenty and therefore, BASIC errors were aplenty, as well. But, as it turned out, debugging BASIC was the best way to learn BASIC. I quickly became quite competent, in my opinion, anyway.

Then 1982 rolled around and I remember seeing an ad in COMPUTE! magazine for the all-new Commodore 64. 64k of memory? I couldn't believe it. This was incredible and exciting news. I can still remember seeing my first C64 on display in The Bay department store near where we lived. I remember playing around with it and thinking 40 text columns and 16 colours was amazing. I started my campaign to convince my parents that I needed an upgrade. This was a big ask, and it was tough convincing them, but one day my mother showed me a newspaper ad from Eaton's (another major Canadian department store). The ad was for a "sensational package deal"... You could pay more for a less versatile home computer without any extras. Or you can buy the Commodore 64 plus disk drive unit, a desk and a software package – at Eaton for 1,299.00.

My parents were actually considering this for me! I understood that this certainly was not inexpensive for us, but they saw how immersed my interest was with the VIC-20 and realized that computers were the future. But there were conditions, one of which was that I had to sell my beloved VIC-20. We put an ad in the Classified section of the Toronto Star newspaper and it wasn't long before I had a buyer, a retired gentleman, who was happy to pay $350 for my VIC-20. A bittersweet memory.

Thursday, March 31, 1983: Thirty-eight years ago today, my mother drove me to the Eaton's department store at Yorkdale Shopping Centre in Toronto – I am not sure why I wasn't at school that day. We spoke to a sales representative named Mike Huffman who sold us the Commodore 64 package deal. How do I remember all these details? Well, I had taken the time to type out all the historic details and staple the sales rep's business card on a small piece of paper and taped it to the inside of my C64 box. Yes, I still have most of the original items purchased that day, in particular, my original Commodore 64 computer in-box with all accessories. The piece of paper was still there, too. 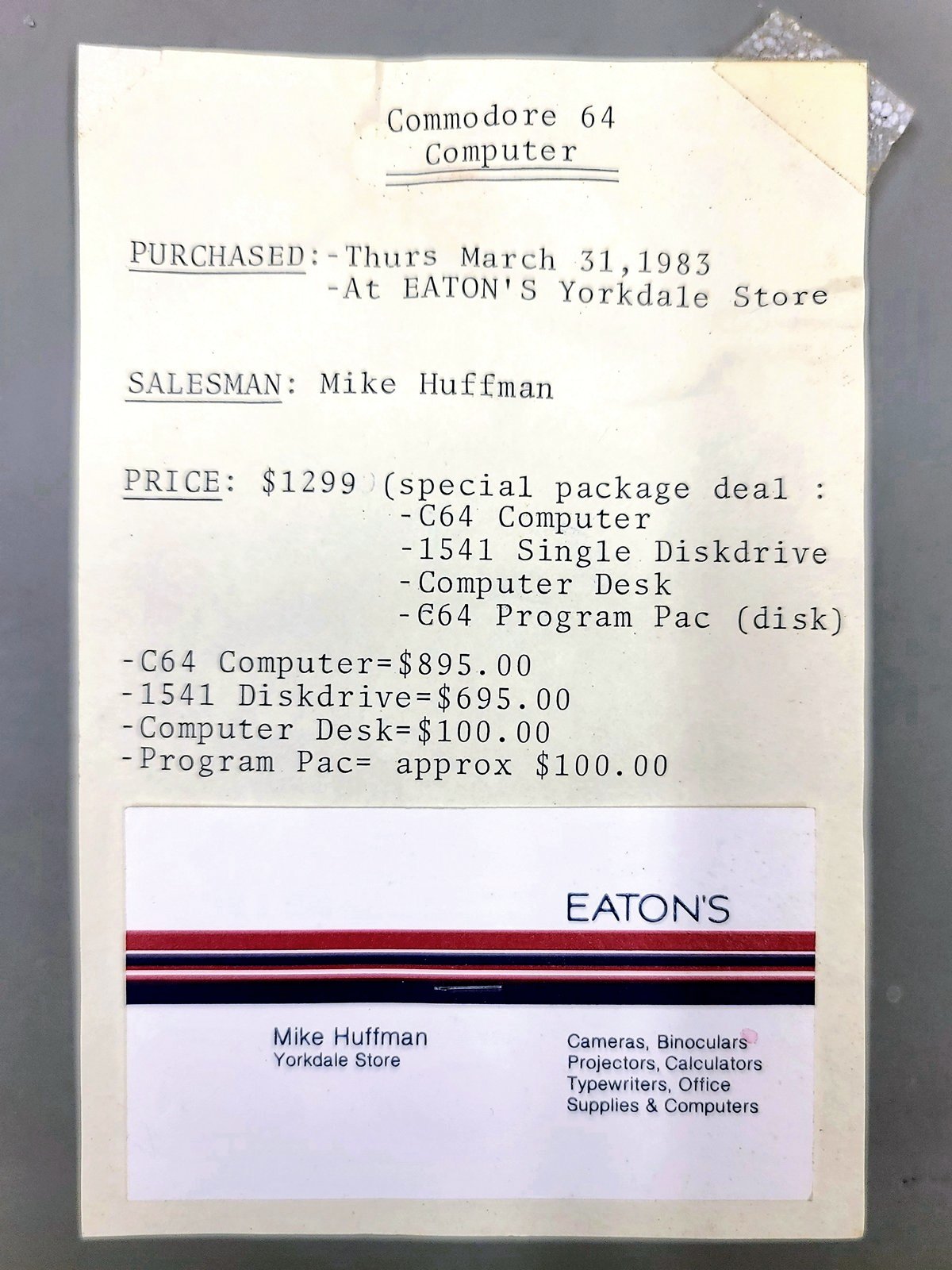 What followed was a passionate four-year relationship between boy and computer. I learned a lot, all self-taught from what resources I had (magazines and books). My high school had a computer lab full of PETs and one C64. When the computer science teachers had C64 questions they always asked me. It was a great time to be a teenager and live through the glorious rise of the microcomputer. Most of my friends had C64s – some had ATARIs and some had Tandys – of course, we often had the which computer was the best debates – the C64 was always the winner to me – I really did adore my 64. My time with the VIC-20 and Commodore 64 truly did shape my future in many ways, especially my career choices.

Microcomputer tech was evolving quickly and I was always wanting to explore what was new, bigger and better. In 1985 the rumours had started about a new Commodore powerhouse computer and it was not long after that I saw the premiere issue of Amiga World magazine on a bookstore shelf – the Amiga 1000 on the cover was beautiful. I bought that magazine and read it cover to cover several times over.

I had to wait until 1987, when the cost-reduced Amiga 500 was released before I could have an Amiga for my very own. After almost five years the time came when I packed away my C64 and moved to an Amiga 500, which I used in my later high school years and all through university. After university I sold the A500 and upgraded to an A1200; it was my daily driver until 1998 when I got my first real-world IT job as a junior programmer and it was suddenly a PC world for me – not by choice, but by necessity. My A1200 was decked out for the time – phase5 Blizzard 1260 accelerator with Blizzard SCSI Kit IV SCSI-II add-on board, lots of RAM, external SCSI ZIP drive, upgraded low-profile 3.5" internal hard drive, 3-button mouse and more. Thankfully, I had packed it away safe and sound, and I still have it all, today.

Fast forward to 2016: One weekend I decided to dig out my C64 from storage and set it up to show my son. I removed it from the box and was surprised to see that it looked the same as the day I had packed it away 29 years earlier – it had not even yellowed. I set it up on a desk with my 1541 floppy drive, an original monitor and powered it on – ah yes, the blue screen of life blinked READY once again. We loaded up Back to the Future from floppy – yes, all my old floppy disks seemed to work fine – and we played for a short time. Suddenly, the red power LED started to fade, and before I knew it, my C64 went dark and quiet. I was mortified.

This fate for my beloved C64 was not acceptable. I made the decision that I was going to fix it, no matter what. I started researching Commodore repair online. I discovered the YouTube greats, GadgetUK, bwack, RetroGameModz and more. I started to soak in all the knowledge and after a while (and after reconstituting my basic electronics workbench) I did repair my childhood Commodore 64.

It felt great to actually be able to repair my childhood computer and I started to think of how many people out there still have Commodore 64s and other old retro computers sitting in a box, hiding away in a closet, forgotten. And how many of those people come across that old computer and just toss it in the garbage. I started posting wanted ads on local (and not so local) buy and sell sites like Craigslist and Kijiji. I think that I might have been one of the first people to post wanted ads like this in my area of Canada. The response was better than I had expected – some people were looking to sell old Commodore gear (I negotiated many reasonable offers) and some people just wanted to donate their beloved Commodore computers to a worthy cause, that being me and my efforts to collect and preserve retro computers. After several small and a few huge hauls I had to get to work trying to repair and refurbish these computers, and I wanted to share my excitement with other people of my vintage on social media and by creating YouTube videos – MindFlareRetro was born.

I now collect unwanted and neglected retro computers as a hobby and do my best to resuscitate and refurbish them in my own spare time and share my adventures through videos on YouTube and retro computer community posts on Twitter and other socials.

I am not an expert, but I learn as much as I can from those who are more knowledgable and in turn, hopefully, inform others who share a passion for the preservation of retro computers.

Thank you, Commodore, for your part in the 8-bit revolution—you had me at READY.

Dave Ball
wrote
Apr 4, 2021, 06:42 AM
Wow, same issue I ordered my ZX81 from. Of course I was 24 at the time, so I bought it. I had been involved with computers since I was about 13 or so. My next door neighbour was a bit of an electronics geek and probably about 30 at the time. He let me hang around while he invented and built things, one of them being a transistorized analog computer. Six months of building and he built what was basically a very large calculator with telephone dials for input and neon lights for output. I moved shortly afterwards but he went on to move to Arizona, work for Rockwell and take part in designing modules for the first space shuttle. I learned a lot from him and computers have been part of my job in one way or another since I bought that ZX81 Kit. I&#039;m long retired now but still spending a lot of time working on computers. Good luck with your new Website! P.S. Did you ever get the CoCo 2 working?
This website may use cookies and external scripts. More information